Compound interest: the eighth wonder of the world

People often talk about the ‘Seven wonders of the world’, but did you know there are actually several different versions of the seven wonders?

It started with the Seven Wonders of the Ancient World. It was based on guidebooks popular among Hellenic sightseers and only included works located around the Mediterranean rim and in Mesopotamia. The number seven was chosen because the Greeks believed it represented perfection and plenty, and because it was the number of the five planets known anciently, plus the sun and moon.

In 1994, the American Society of Civil Engineers compiled a list of Seven Wonders of the Modern World, paying tribute to the “greatest civil engineering achievements of the 20th century”.

Then in 2001 an initiative was started by the Swiss corporation New7Wonders Foundation to choose the New7Wonders of the World from a selection of 200 existing monuments. This is the list most often referred to nowadays and comprises:

Whilst not included on any of these lists, Einstein made reference to an eighth wonder of the world…

“Compound interest is the eighth wonder of the world. He who understands it, earns it … he who doesn’t … pays it.” Albert Einstein

Einstein went further and even referred to compound interest as the most powerful force in the universe. So let’s take a look at it in action:

From the following three scenarios, assuming an investment return of 7% who do you think at age 60 ends up with the most?

So how is this possible?

The greatest power in the universe

The principle behind the compound effect is that if you keep the interest your money has earned invested, you then make extra interest the following year since your overall balance has increased.

This is demonstrated in the following chart: 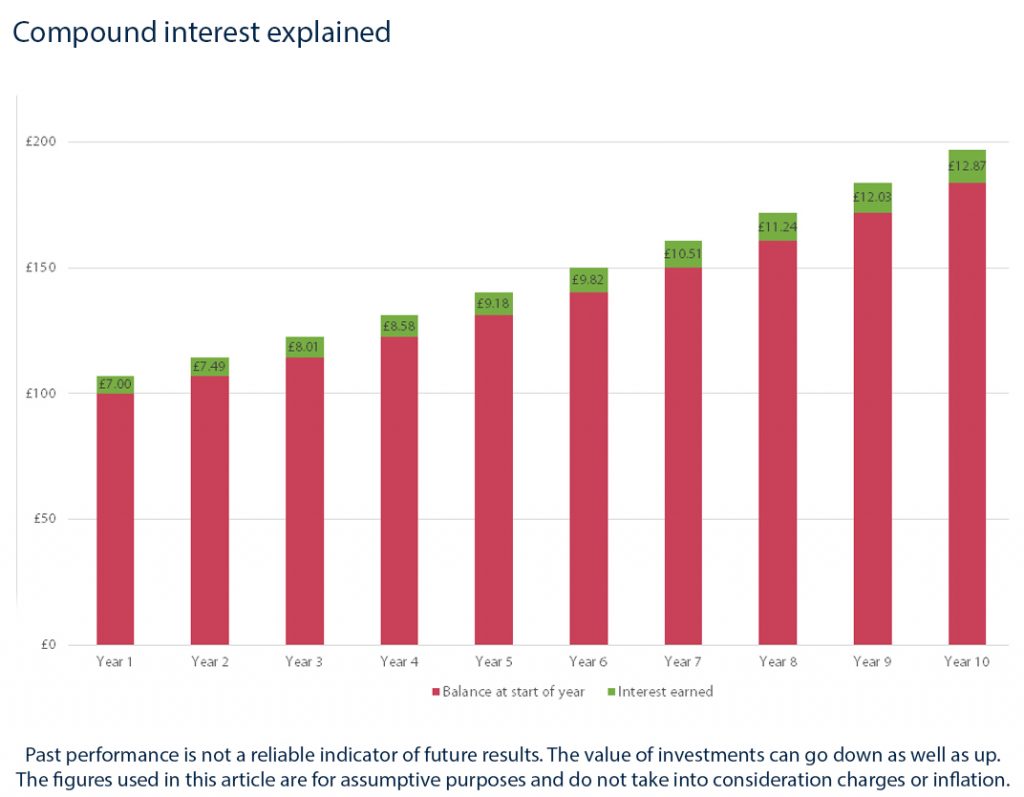 [Note: The interest earned increases each year despite the interest rate staying at 7%.]

The interest continues to compound each year (hence the name Compound Interest) and is an insight into how longer investment periods allow for greater returns. In this example in ten years the initial investment has almost doubled.

I have other priorities

As powerful as this concept is, it doesn’t overcome the issue that we often have greater immediate priorities. The reason we end up saving more at age 40 compared to ages 20 and 30 is that our outgoings have decreased. At 20 and 30 we’re saving for a house deposit, getting married, starting families, etc. Whereas as we get older, our children (hopefully) move out, we pay off our mortgages, we get pay rises, etc.

So what’s the answer?

It may seem odd, but a child can have a pension plan from birth – and contributions from parents or grandparents could lay the foundation for making the child a pension millionaire before they even leave school.

Pension contributions are normally pegged to earnings because of the tax relief they attract. The rules state, however, that anyone – even a child – can contribute up to £3,600 a year into a pension even if they have no earnings at all. Even better, contributions still attract tax relief, meaning that the £3,600 contribution costs just £2,880.

Past performance is not a reliable indicator of future results. The value of investments can go down as well as up.

The figures used in this article are for assumptive purposes and do not take into consideration charges or inflation.