Wednesday 11th December was a special night for the Furnley House family. The Furnley House Foundation which launched on 1st June 2019 at their Summer Ball gave out their first grant to a local charity which provides food, clothing, furniture, skills training, mentoring, advice and a listening ear to those in need in Leicester.

The Trustees have been working on launching a grant scheme to help local causes and opened this up initially to Furnley House staff and those that attended their spectacular summer ball in June this year. A number of applications were reviewed by the Trustees and the one chosen was for Open Hands, Leicester.

Simon Winfield, Chairman of the Foundation said “It was difficult to choose between the applications because all of the charities were really admirable but Open Hands Leicester stood out for us because of the impact they have on developing people to help them out of tough situations.”

The announcement was made at the Foundation’s first Christmas event at Pennbury Farm in Leicester. Furnley House colleagues, Furnley House Foundation Trustees, friends, family members and local businesses were all invited to a fantastic evening with mulled wine and canapes at the newly opened venue in Great Glen and Debbie from Open Hands Leicester was there to tell attendees about the charity and the difference they make.

Debbie gave a powerful speech to all attendees, explaining how they had seen a 23% increase in emergency food requests with many families having insufficient funds to make ends meet and the funds from the Foundation would help them provide 50 hampers made up of snacks, drinks, Christmas crackers and supermarket vouchers to help the recipients to buy food to make Christmas Day special for them. Debbie said “It was great to be at the Furnley House Foundation Christmas event on the 11th I really enjoyed hearing more about the foundation and meeting everyone who has been involved and supported the Foundation. Thank you to the Furnley House Foundation for presenting such a generous cheque to us.  Our preparation for sending out all of the hampers between 17th and 19th December is all done and ready to go.”

The evening came to a close at 9pm, after 3 raffle prize winners were announced and Simon announced that the event had raised an additional £400 to go towards the Foundation!

The Foundation Trustees are now concentrating on opening up the grant scheme to the public in the New Year and planning more great events including their annual Summer Ball on 16 May at Leicester Marriott Hotel. 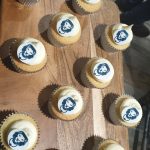